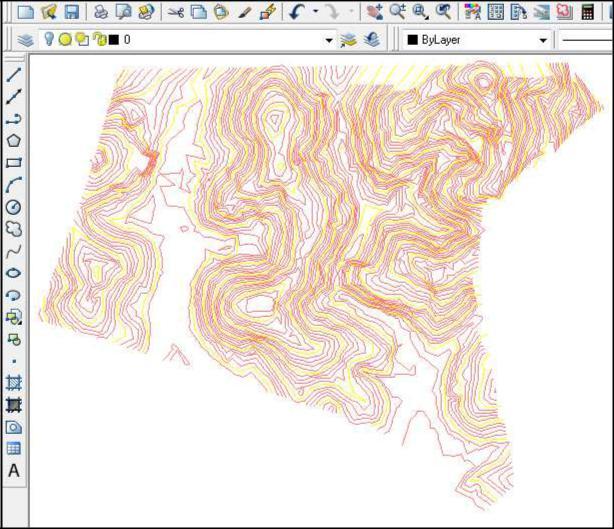 Contour lines that are having incorrect Z value or elevation are not usable. 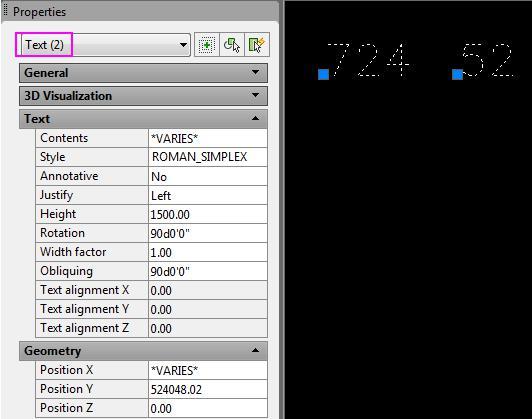 A spot level with two separated texts which fulfil the following criteria will be accepted during survey point import:

The two separated texts of a spot level have the same Y-coordinate.

Distance between two separated texts of a spot level is less than or equal to the value specified in setting. 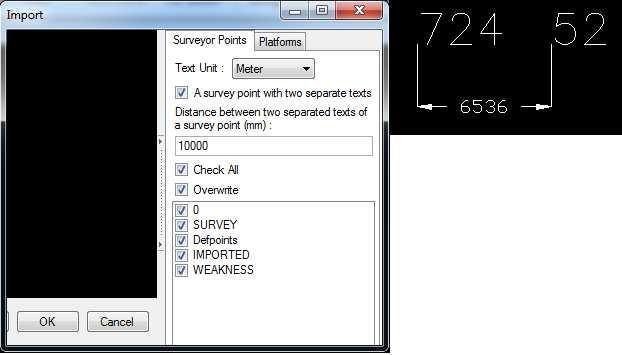 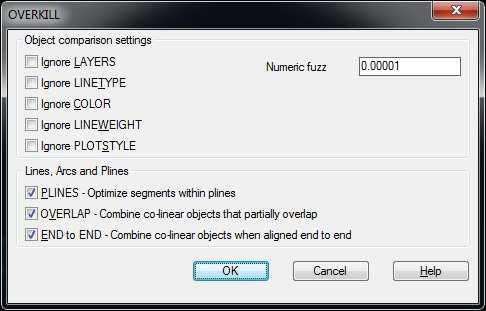 Make sure the user coordinate system (UCS) is as below; not rotated: 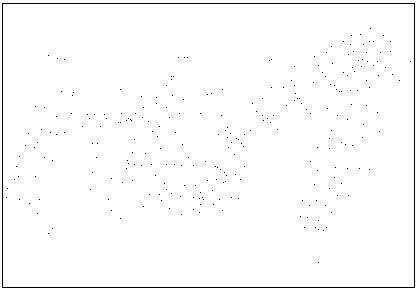 Points that have incorrect ‘Position Z’ values are not usable. 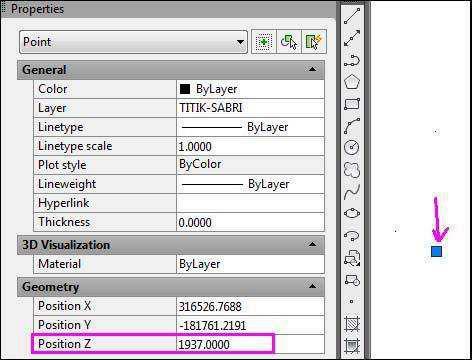 Prior Requirements for Import # 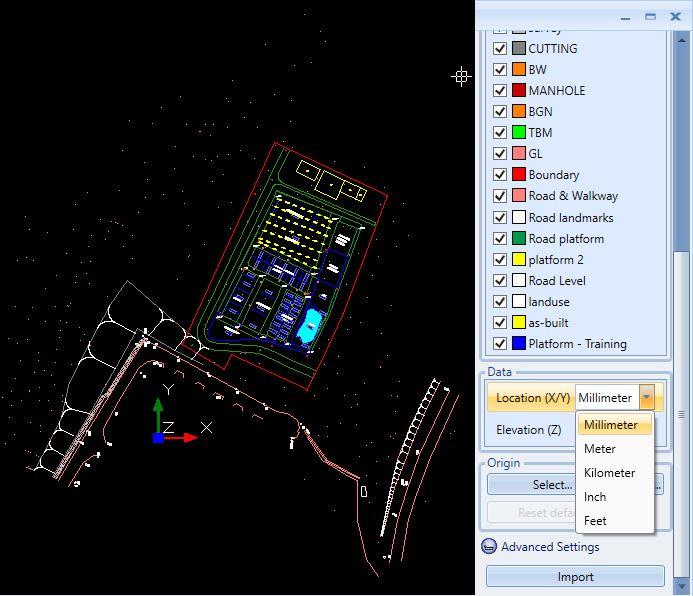 Users must have prior knowledge of which layers in the drawing are needed to be imported.

Select ONLY the layers needed for the surveyor drawing import: 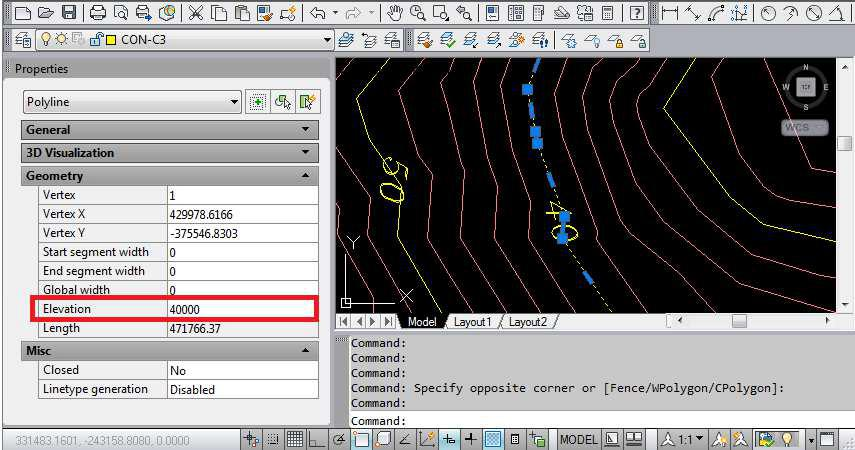 For the import of drawing with Texts, check the text and make sure the value in the ‘Contents’ is an acceptable numeric or alphanumeric text. (Refer to below) 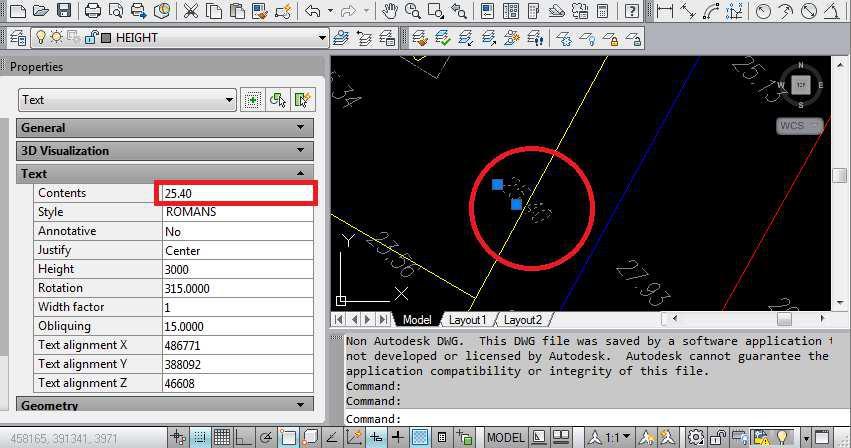 The command ‘FIND’ in the CAD program can be used to replace all the alphabet or symbols to an acceptable format.

There are five unit conversions for Texts; the Texts can be either in millimeter, meter, kilometer, inch or feet in the drawing. Application will only accept and import IL, INV, and SIL alphanumeric texts, the rest will be discarded. 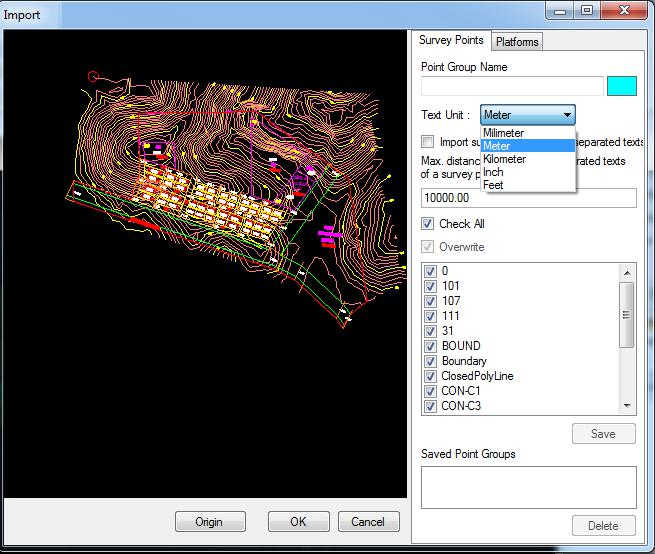 Select and open the CAD drawing

which are ONLY relevant to survey data and click ‘Save’ & ‘OK’ .

a. Saved survey points group can be deleted by clicking the ‘Delete’ .

b. Survey point groups with different colours can be created via changing the colour box located at the right of ‘Point Group Name’ before clicking ‘Save’

c. If there are spot levels with separated two texts being imported into application, kindly ensure the checkbox of the ‘Import survey point with two separated texts’ is ticked.

To active the advance settings, click the Advanced Settings button at the bottom RHS

Then, the advanced settings tab will be shown

Platforms Import (if any)

Choose the respective layers ONLY for platforms imported in the ‘Platform’ tab & click OK.

There have same criteria need to meet before import platforms into application:

a. The platforms drawn in the CAD program must be CLOSED POLYGON.

b. There must have Proposed Level Text inside the polygon in order to generate the correct proposed level after imported.

CSV (comma-separated values) format for survey points can also be imported in MiTS. Example of CSV file as below. 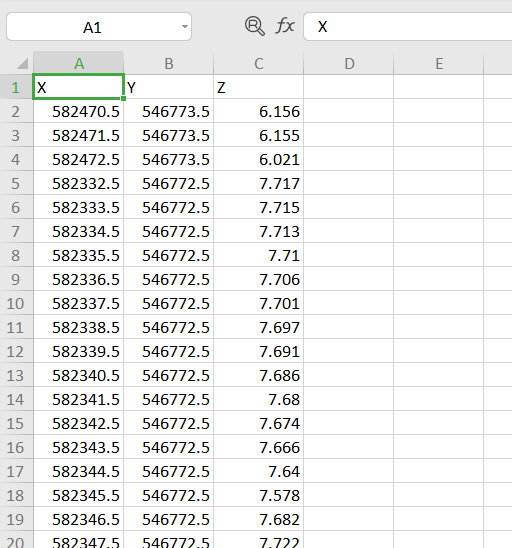 Then, choose to assign the unit accordingly and click on Import. 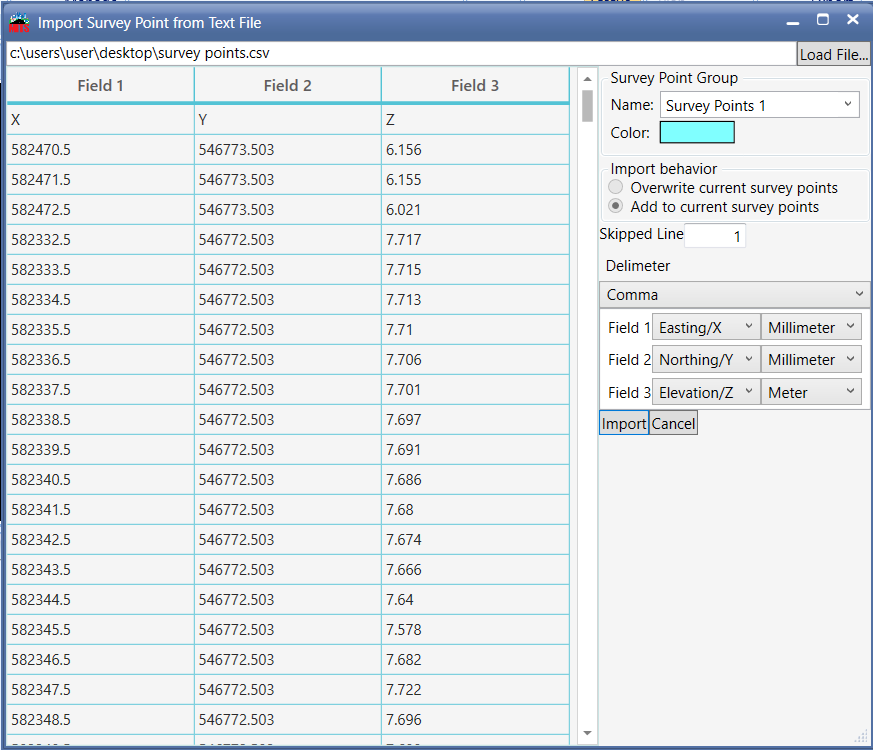 LAS format is a file format designed for the interchange and archiving of Lidar point cloud data.

In MiTS 2 now, users are able to use google earth import from Google.

The Gearth Import tab will look like image below:

For further reference, user can refer to the linked video below for visual guidance.

How to import more than one (1) survey point groups #

Select the survey point group at the comparison tab and click calculate.

Users are now able to show the survey point value.

All in One Import Function  #

All in One import function is now available.

This is to allow users to import all modules in one go.

For example, to import survey points, earthwork platforms and drainage networks in one click.

Go to Import > select drawing > at ‘All in One Import’ tab, users may switch tabs to select which module to import

What are your Feelings

Still stuck? How can we help?

How can we help?